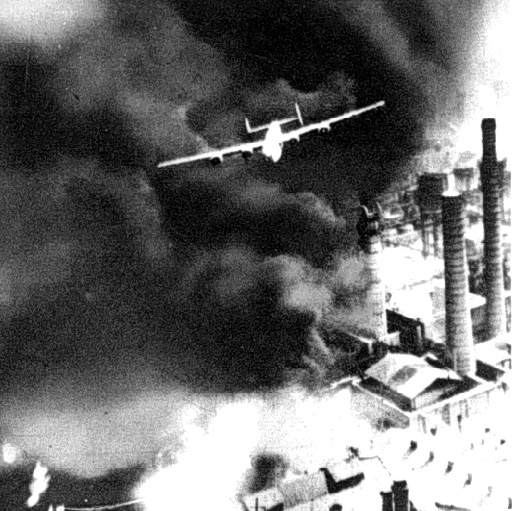 For Operation Tidal Wave the 389th BG were the new kids on the block. They arrived in England only days before shipping out to North Africa to prepare for the Ploesti mission. During the first half of July 1943 the group flew six combat missions from Bengasi against targets in Crete, Italy, and Sicily. These missions were in support of the Allied landings on Sicily on July 10th. After the July 19th mission against Rome, the group was pulled from flying combat and began practicing for the Ploesti mission. The 389th BG drew the Steaua Romana oil refinery, in the town of Campina, as their target. It was believed to be an easier target, but it was also the furthest target from Bengasi. On the morning of August 1, 1943, twenty-nine 389th BG aircraft took to the air carrying 292 aircrew. All twenty-nine reached the target area, and the Steaua Romana refinery was put out of commission for six months. However, four aircraft were shot down near the target area, and two more limped into neutral Turkey where they were interned. The cost of knocking out Steaua Romana was high that day. Nineteen men were killed, twenty-three were taken prisoner, and nineteen were interned in Turkey. In addition, approximately 62 other 389th BG aircrew flew on 98th BG aircraft for this maximum effort mission. Of these men, eleven were killed, ten captured, and four fled to Yugoslavia where they met up with Tito's resistance movement.

Mechanical problems, unable to take off.

Back to Ploesti Mission Page